On April 26, TEC Infrastructure signed a contract with Vilnius City Municipality on the design of Užvingis Island Bridge in Vilnius: a team of the company’s designers and engineers will develop the final bridge design together with KILD architects. Moreover, TEC Infrastructure will be responsible for the project management, engineering design solutions, and the building permit. The contract provides for 18 months for these works.

The design of Užvingis Island Bridge includes a branched out bridge of minimum dimensions with terraces for pedestrians and cyclists. On the left river bank in Vingis Park, the bridge is located away from an existing water extraction point and a historic ravine to preserve the exceptional environment. The bridge will be accentuated by a triangular green square at the bend of Čiurlionis Street, where pedestrians and cyclists coming from all directions will converge. On the right bank, the bridge access will be integrated into the terrain to be developed, marking the historic
Užvingis Island, preserving its contours and the space of a no longer existing watercourse, and creating a new park with a character and the bridge as its highlight. Traffic flows from the new complementing public space, the park, will then be directed to Litexpo, Lazdynai, Karoliniškės Reserve, etc., creating a crossroads for pedestrians and cyclists on the river bank, thus avoiding downward ramps in the natural environment.

The signed contract with Vilnius City Municipality marks the commencement of important works for Vilnius dwellers. Užvingis Island Bridge is more than a mere bridge connecting two shores. It proposes a solution on how to simultaneously create a new public space, a park. Before developing the exact final design, hearing the opinion of the townspeople, especially the dwellers of the surrounding Lazdynai and Karoliniškės districts, is highly important to us to understand the needs of the disabled, and the wishes of the cyclists, thus we invite the public to familiarize with the design in advance and to provide comments, – invites Vilius Karieta, the Project Manager of TEC Infrastructure.

Vilnius dwellers are invited to familiarize with the project on 13 May, at 17.30, at Vilnius City Municipality’s Council Hall (Konstitucijos Ave. 3). The detailed design presentation is available at: http://tec.lt/en/kild-architects-the-new-vilnius-bridge-is-more-than-a-mere-structure-linking-two-riversides/

In December of 2018, Vilnius City Municipality and the Lithuanian Union of Architects announced the architectural design contest for the pedestrian bridge over the Neris River in Vilnius, from Vingis Park to the Litexpo area. 16 designs were submitted. This March Užvingis Island Bridge was declared the winner of the contest. Its idea was proposed by the architects’ team KILD (Ivane Ksnelašvili, Petras Išora, Ona Lozuraitytė, Dominykas Daunys) together with TEC Infrastructure. The Architectural Lead is the architect Petras Išora, and the Project Manager of TEC Infrastructure is the structural engineer Vilius Karieta. 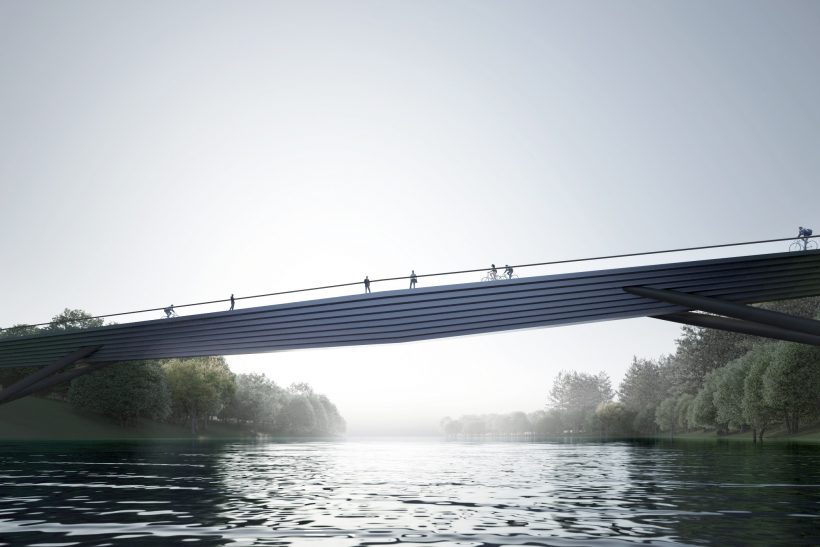