Last week project Užvingio Salos Tiltas (Užvingis Island Bridge) presented by KILD architects and TEC Infrastructure was declared the winner of the architectural design contest for footbridge across Neris river from Vingis Park the Lithuanian Exhibition and Congress Centre Litexpo. How was this idea born and what could be expected by Vilnius residents and guests of the capital?

‘We derive our idea from urban motives, thus designing of the bridge included analysis of todays and historical data which helped to understand the context of the contest – urban, natural and cultural. This Project reflects functional needs of modern society, creates a new identity, responding to the historical features of this place,’ says one of the authors of the project, Petras Išora.

Project Manager of TEC Infrastructure, designer of Užvingis Island Bridge, Vilius Karieta says that the very key to success in this Project was the throughout analysis of the location, purpose and general context, including both natural, historical and implementational and operation aspects, the unique architectural idea restoring historical role of Užvingis island to be a supplementary public recreational area, a Park, extending green areas of the city.

By comparing the historical material with the current situation, the authors of the Project discovered that until the 19th century – 20th century in this place, currently, on the right bank of the river, there was the Užvingis island. This is characteristic part of Neris Valley opposite the former Jesuit complex (now VU Botanical Garden) on the other side of the river, on the lower terrace of Vingis Park. Together, these objects were captured in the famous ‘Vilnius Album’ of J. K. Vilčinskis, depicting the landscape of the island and the Jesuit Palace in 19th century. It may be that the island has disappeared naturally by flanking to the bank.

It was proposed to orient the bridge towards the very centre of the Island thus preserving its contours and creating a park with a bridge to be used as an emphasis distributing flows towards Litexpo, Lazdynai, Karoliniškės reserve and others. The Bridge and the Park will function as an ensemble of public spaces, allowing to stop over and nearby the river and admire the scenery of the Neris Valley and Vingis Park.

To preserve historically formed natural frame, axis of the new bridge will be oriented to Užvingis island and substantially spaced apart from the adjacent watering place and organic gully at the Vingis Park side seen on the drawings of Vingis Part dated 18th century. ‘By preserving the existing geological natural structures, we cherish the valuable features of the Vingis Park environment, since this Park is particularly valuable due to land surface uniquely shaped by the river and the glacial period (geomorphological arrangement), on which one of the oldest forests in the territory of Vilnius grows’ – says architect Ona Lozuraityte about the very idea of the Project.

In Vingis Park the Bridge will be accented by a triangular square at Čiurlionio Str. bend accepting flows of pedestrians and cyclists from all the directions.

The Project focuses on the infrastructure of cyclists in order to select optimal paths and slopes for smooth cycling.

Authors of the Project have adopted a harmonious and sustainable approach to the environment, so that the impact on the environment is minimal, and, at the same time the route between the banks is the shortest one. This approach also allows for more attention to complementary connections and public space access.

‘New bridge will be located in an exclusive area – landscape of both sides of the river causes many challenges to bridge construction, thus we needed to select construction technologies in terms of minimum impact on the environment and watering territories to preserve organic gully located nearby. These were the challenges for which we have been looking for solutions together with architects in order to offer an optimal solution based on the preliminary construction price set by the municipality’, says V. Karieta, TEC Infrastructure Designer.

Not just a connection

‘Užvingis Island Park along with the bridge emphasising its exclusiveness is formed as a continuous public area. Culmination of this spatial concept is a seating terrace of the Bridge springing out the barrier between cycling route and a footpath at the very beginning of the Bridge evenly converted into ergonomic space to sit or lay down and to admire panoramic Neris Valley in the very centre of the Bridge’, – states the architect Dominykas Daunys. Another feature of the seating terrace is to form safety barrier between cycling route and a footpath.

The new Bridge, together with the Island Park, will create a connection and a complex of public spaces, which will decorate the expanding city centre at Litexpo and harmoniously connect all the public spaces of Vilnius near the Neris structure. ‘The New Vilnius Bridge is more than just a structure connecting two banks – it will form special public space by the river’, says Ivanė Ksnelashvili, a member of KILD team of architects.

This is the second successful project of KILD architects and TEC Infrastructure, which has won a public the architectural design contest.
‘We are delighted to find a balanced creative dialogue with TEC Infrastructure Engineers, where the starting point for the bridge construction is tightly related to the extensive idea of understanding the unity of context, public space needs, culture and the city. Designing for architects and engineers working together from the initial stage reveals the holistic ambitions of a good environment that we aspire to as architects, and ensures the rational technical laws that are needed for the construction, and ultimately delivers a sustainable, well-balanced result for the city’, summarises KILD architects.

Activities of KILD architects involves designing of a public space, public and private buildings. Creative team of KILD architects was also successful in the ‘Eco bridge’ competition in Seoul and footbridge with public areas at Nemuno Island in Kaunas.

TEC Infrastructure is a part of TEC group pursuing its activities in the sphere of infrastructure, industry and energy design and consulting. The group employs 94 persons, 70 of them are qualified engineers. TEC Infrastructure has already designed more than 500 facilities of transport infrastructure, such as footbridge in Alytus, arched girder along Žemaitkiemis at A2 road, Rusnė elevated road, footbridges across Nemunas in Kaunas. 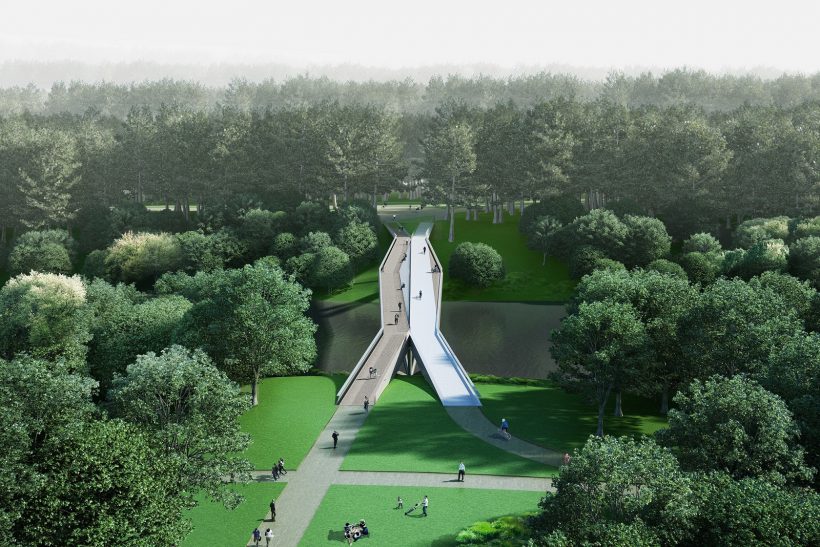