TEC Infrastructure team together with KILD Architects has won the tender for the design and project supervision of the bridge from Nemunas Island to Aleksotas in Kaunas. TEC Infrastructure’s Head of Bridges Audrius Voveris and Project Coordinator Andrius Indriliūnas share their plans for the project.

“At the end of 2021, the 73-metre-long bridge project prepared by UAB TEC Infrastructure and KILD architects, connecting Karaliaus Mindaugas Avenue with the Nemunas Island, was successfully implemented. Now the company has an even bigger challenge – to finally connect the two banks of the Nemunas by designing a 280 m long bridge between Nemunas Island and Aleksotas. This will create a link between Karaliaus Mindaugas Avenue – Nemunas Island – Aleksotas,” says Mr Indriliūnas. “According to the project, the following elements will be constructed in the future by contract: a cantilevered pedestrian bridge, pedestrian walkways, lighting networks, engineering networks and a public space on the left bank of the bridge approaches,” adds Mr Voveris.

The pedestrian bridge from Aleksotas to the Nemunas Island forms a very important link in the pedestrian and cycling infrastructure of Kaunas city between the existing and planned trails on the left and right banks of the Nemunas River.  “The projected path will connect the path planned in the Special Plan for Cycle Paths of Kaunas City (doc. reg. no. T00017011), which is planned to run parallel to H. and O. Minkovskiai Street with the existing recreational cycle path on the Nemunas embankment,” says the Head of Bridges at TEC Infrastructure.

“A bridge is a transport instrument and at the same time a public space by the river. Therefore, following on from the ideas of the competition we jointly won back in 2018, the bridge structure, supports and environment will be designed in such a way that it is both a smooth connection for passing or cycling, and a comfortable and gathering place to spend time by the river,” says the authors of the project’s architectural design and the architectural and site-plan elements, the solutions for the installation of the public spaces of the abutments and banks, and the bridge’s architectural expression, the KILD architectural team (P. Ishora, D. Daunys and I. Ksnelashvili).

“The two bridges will form a seamless link, which aims to incorporate into one system the objects important for the development and expansion of Kaunas city centre, to improve pedestrian and cycling connections between both banks of the Nemunas River, as well as to connect the existing and promote the development of new pedestrian and cycling routes,” shares Mr Indriliūnas, the project coordinator.

As the new pedestrian bridge will be located next to existing and planned facilities where a large number of visitors is expected during events (up to 0.5 thousand at the Science Museum, up to 2.2 thousand at the M.K. Čiurlionis Concert Centre, up to 20,000 at the Žalgiris Arena), the aim is for the bridge to blend into the overall local architecture and to provide a comprehensive response to the residents’ transport needs. “The development of the area in question, the design of new facilities on the Nemunas Island and on the left bank of the Nemunas River, generates the need for a new transport infrastructure to reach them, and demonstrates the importance of the pedestrian bridges to be designed,” explains a TEC Infrastructure specialist.

TEC Infrastructure is part of the TEC Group of companies, which also includes TEC Industry and TEC Consulting. The group provides design, consultancy, maintenance, project and construction management and other engineering services for transport infrastructure, industrial and energy facilities. 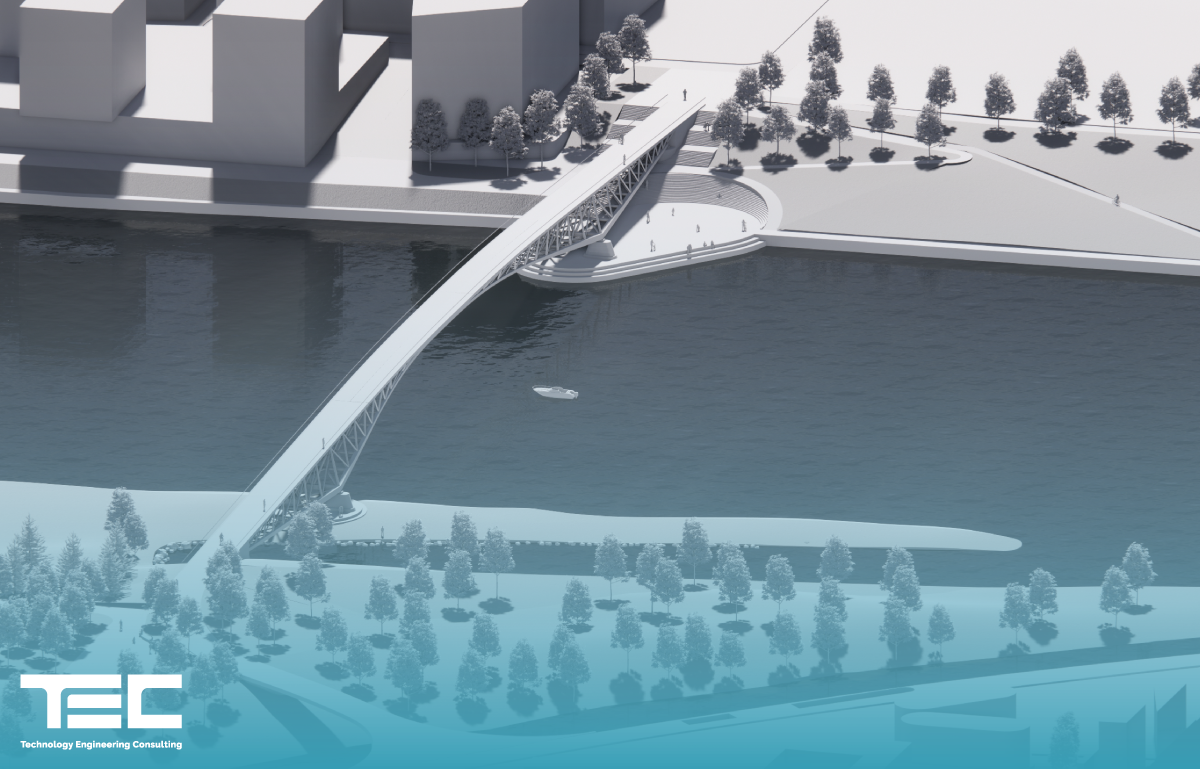