TEC Infrastructure, a transport and infrastructure design company, together with the team from KILD Architects has presented for public assessment two design proposals for pedestrian bridges over the Nemunas River from Aleksotas area to Nemunas Island and from Nemunas Island to Karaliaus Mindaugo Avenue.

The pedestrian and bicycle traffic connections between the two Nemunas embankments and Nemunas Island will be implemented through the construction of two bridges. The smaller bridge will connect the island with the Old Town and the New Town, and the bigger one will ensure access from the island to H. and O. Minkovskių Street. At the approaches of the bridges, additional public spaces are to be constructed, the Nemunas Bridge Amphitheatres, enabling you to admire the 360-degree panoramic view of the surroundings and the Canal Bridge park access square.

‘The two bridges will form an integral connection, creating the linkage between these important areas of urban development and binding them into a single system. The historic centre of Kaunas and the Nemunas Island intended for recreation with the projected National Science and Innovation Centre, and the MK Čiurlionis Concert Hall. While the bridges will promote the renewal of the left-shore industrial areas in Aleksotas and the Lower Freda by improving the pedestrian and bicycle traffic connections between the two banks of the Nemunas River. The location is truly unique. So when designing the bridges, our aim was to combine a convenience, functionality and aesthetics suitable for this unique public space at the water’s edge such that the citizens would like and be able to use the bridges at all times of the year. Therefore, the opinion of the city residents as key users of this area, as well as that of other professionals, is very important to us. Accordingly, we invite you all to familiarise yourselves with this project in advance,’ says the team of TEC Infrastructure Designers and KILD Architects.

‘The Nemunas bridges will have some iconic public spaces with a lightweight openwork design, and, at the same time, it will be smoothly integrated into the neighbourhood of the Old Town. In terms of the architectural language, the bigger bridge will reflect the characteristic features of the port that operated on the site of the Nemunas Island at the beginning of the 20th century and the truss bridges that existed there. The new connection will enhance the individuality of the city and give a new shape to a favourite space for the residents. As well as opening up new scenery, the connections will remind visitors of the historical features of the former port city in the Nemunas water area,’ say the KILD Architects and invite everybody to the project presentation / exhibition at Kaunas Architects’ House Gallery (Vilniaus str. 22, attic), opening on January 8th.

On January 11-12th, during the opening hours of the exhibition (2:00pm to 7:00pm), you are welcome to meet and have discussions with the project authors, the design teams from KILD Architects and TEC Infrastructure.

• The website of Kaunas City Municipality: http://www.kaunas.lt
• The headquarters of TEC Infrastructure: L. Zamenhofo St. 3, Vilnius; 7:30am to 4:30pm on working days up to the 14th January.
• Exhibition at Kaunas Architects’ House Gallery (Vilniaus St. 22) on January 8-20th, 2:00pm to 7:00pm. At this location the newly developed project will be presented in the most comprehensive way with 3D visualisations, video material, and the model.
The public discussion of the design proposal is scheduled for the 14th January 2019 at 5:00pm in the Small Hall of Kaunas City Municipality (address: Laisvės Av. 96, Kaunas).

More details about the project for the two pedestrian bridges over the Nemunas River in Kaunas:

• The projected pedestrian bridges will serve as a connection for pedestrian and bicycle traffic flows between the banks of the Nemunas River (the Old Town, New Town and the renewed Aleksotas Embankment). They will enhance the function of Nemunas Island as a central park, recreational area, and connecting element between the two banks within the central part of the city.
• The design of the bridges, and their approaches, will create optimal pedestrian and bicycle traffic links between the embankments and the island by distinctively and organically expanding local connections and by offering public spaces near the bridge supports and the river.
• The supports of the Nemunas Bridge are supplemented with amphitheatres, thus providing a multi-level space for admiring the panoramic views and engaging in a variety of activities.
• The Canal Bridge is a continuation of the embankment towards the island. The continuation will form a square on the approaches to the park next to the Firemen’s House.
• The characteristic features of the Nemunas Bridges will be a light openwork structure with a visually minimal centre to the bridge. The embankment-related structures will blend with the banks.
• Both of the bridges will rise up above the surface of the water only to the extent that they do not interfere with navigation, while the absence of any intermediate supports will highlight the aesthetic integrity of the structures. 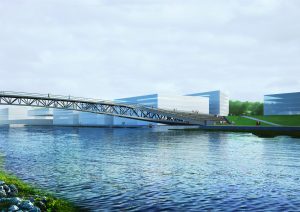